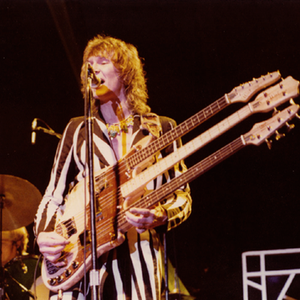 (4 March 1948 – 28 June 2015) Innovative bass player, songwriter, and secondary vocalist from the Progressive Rock group Yes, and as the band name's owner, the only musician to appear on all their albums. He is especially well-known for the use of Rickenbacker basses and his unique bass sound. Squire's solo record is 1975's Fish Out of Water, whose personnel includes Yes alumni Bill Bruford on drums and Patrick Moraz on keyboards. In 2000 and 2003, Squire joined Yes guitarist Billy Sherwood in a side project called first simply Chris Squire & Billy Sherwood, then Conspiracy.