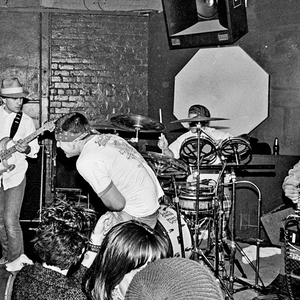 Early Career, Controversy, & First Hiatus (1981–1986) Suicidal Tendencies formed in 1981 as a punk band in Venice, California. The original lineup of the band consisted of Mike Muir on vocals, Mike Ball on guitar, Carlos "Egie" Egert on drums, and Mike Dunnigan on bass. After the recording of their first demo, Carlos Egert left the band and was replaced by Dunnigan's brother, Sean. Muir, at the time a student at Santa Monica College, originally only intended Suicidal Tendencies as a "party band", but as they grew in notoriety he soon found the band at the center of his life. Suicidal Tendencies had a rough start including being voted "Worst Band/Biggest Assholes" in Flipside in 1982 but the following year were voted "Best New Band". There were many rumors of the band members as well as their friends and followers being involved with gangs (especially the Venice White Boyz), with Muir's trademark blue bandanna and violence at the band's performances as evidence. In their original lineup photo, which can be seen inside their self-titled debut album, drummer Amery Smith is wearing a flipped up hat and under the bill are the markings "V13", which are initials for the gang Venice 13. Though there were probably a handful of V13 members who also became ST fans, Amery was not a member of V13 but bassist Louiche Mayorga's brother Steve Mayorga was (and that's whose hat he's wearing for the photo). Eventually an entire gang sprung up around the group, the Suicidal Cycos (also known as the Suicidals, Suis or Suicidal Boyz) with chapters in Venice, Long Beach, Santa Monica, Orange County, Oceanside, San Diego and even a chapter in San Antonio, Texas.