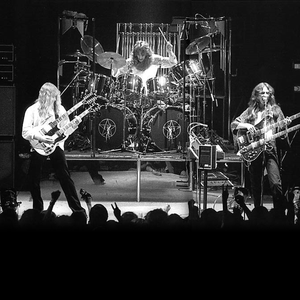 Rush is a progressive rock band which formed in Willowdale, Ontario, Canada in 1968. The band currently performs with the lineup of Geddy Lee (vocals, bass, keyboards), Alex Lifeson (guitar) and Neil Peart (drums). John Rutsey was the original drummer, later replaced by Neil Peart in 1974, shortly after the release of their first album, and three weeks before their first American tour. Neil Peart also became the band’s lyricist, and wrote the words for many of the band’s best known songs. As a group, Rush possesses 24 gold records and 14 platinum (3 multi-platinum) records. According to the RIAA, Rush’s sales statistics place them third behind The Beatles and The Rolling Stones for the most consecutive gold or platinum albums by a rock band.