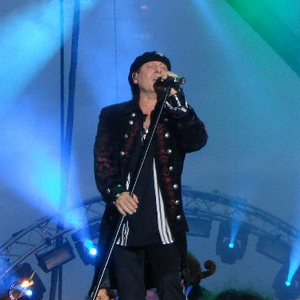 Klaus Meine (born May 25, 1948 in Hanover, Germany) is the German lead vocalist for the rock band Scorpions. In 1981, after a world tour and during the recording of the Blackout album, Klaus lost his voice so badly he could not even speak properly. Klaus was advised by his doctor to consider another job due to his voice problems. However, Scorpions stuck together and after therapy and vocal cord surgery, Klaus's voice recovered. It is said that the surgery actually improved his range.