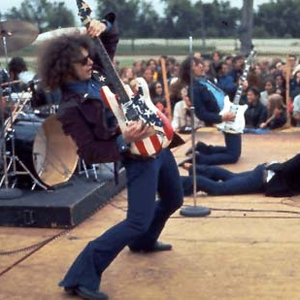 The MC5 was a hard rock band that came out of Detroit, USA in 1966. Their blend of furious hard rock and intense political sentiment was a critical influence on the punk rock movement of the 70s. Standing for "Motor City Five", MC5 established themselves with their first album, Kick Out the Jams, recorded live on October 30 and 31, 1968. The album caused some controversy due to the title track Kick Out the Jams rallying cry of "kick out the jams, motherfuckers," and John Sinclair's inflammatory liner notes. The album concluded with Starship, a cover of a Sun Ra song. Critic Mark Deming notes that Kick "is one of the most powerfully energetic live albums ever made ... this is an album that refuses to be played quietly."