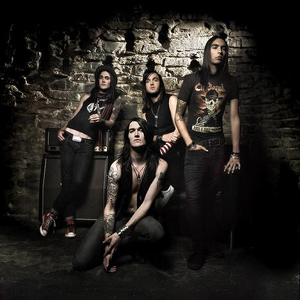 The last four years have been filled with plenty of ups and downs for the young band from Atlanta, Georgia. From line-up changes to living out of cars and rich girl's pocketbooks to fist fighting their way through redneck crowds in the seedy Atlanta underground, Steadlür have beat the odds. Drawing influence from the likes of Guns n' Roses to Mötley Crüe to Foo Fighters to KISS, and everything in between, Steadlür kick out their own intoxicating brand of rock 'n' roll ecstasy, complete with anthemic melodies and addictive hooks. Brother's Philip (lead vocals, guitar) and Dallas (vocals, drums) are joined by longtime friends Daniel (vocals, bass) and Tommy (vocals, guitar) to make up Steadlür, and in the band's own words, rock like "Vikings in party shorts." The band themselves sum it up best when they say, "We just like to play rock 'n' roll and break stuff. See you at the show"