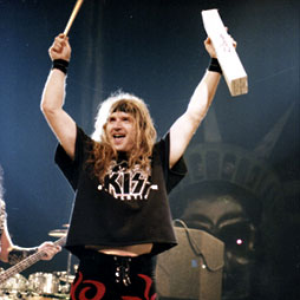 Eric Singer (born Eric Doyle Mensinger on May 12, 1958 in Cleveland, Ohio) is best known as a drummer for the rock band KISS. Singer had previously played in Paul Stanley's solo band, and sat in for drummer Eric Carr during KISS's recording of "God Gave Rock 'N' Roll To You II". Upon Carr's death, Singer joined KISS as a permanent member. He debuted with the band on the album Revenge.