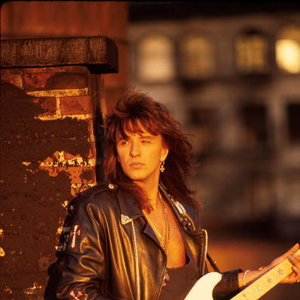 Richie Sambora (born Richard Stephen Sambora on July 11, 1959 in Woodbridge, New Jersey) is best known for having been the lead guitarist for Bon Jovi from 1983 to his departure from the band in 2013. During his time in Bon Jovi he handled harmony and background vocals and collaborated with frontman Jon Bon Jovi in writing most of the band's songs. He has released three solo albums: Stranger In This Town in 1991, Undiscovered Soul in 1998 and Aftermath of the Lowdown in 2012. His main influences are Eric Clapton, Jimi Hendrix, Jeff Beck, and Joe Kmiecik.