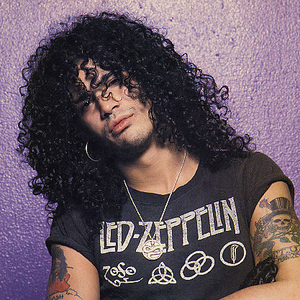 Saul Hudson (born 23 July 1965, Stoke, England), better known by his stage name Slash, is a British-American musician. He is the lead guitarist of the American hard rock band Guns N' Roses, with whom he performed and recorded between 1985 and 1996, Reuniting with the band in 2016. He later formed Slash's Snakepit and co-founded Velvet Revolver with his former bandmates Duff McKagan and Matt Sorum; and his debut solo album, Slash , was released in April 2010. In 2011 he wrote and featured on kick it Up a Notch, the end credit song for The Disney Channel Original Movie Phineas and Ferb: Across the 2nd Dimension. (Kick It Up a Notch Songfacts). He has written a self titled autobiography which was put to print in 2007.