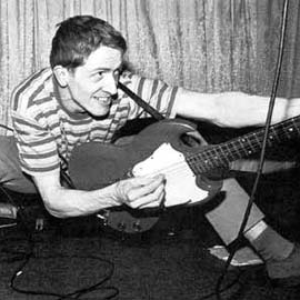 It all started at a Jam concert sometime in 1977. There, big Russ Wilkins first met Billy Childish and asked him if he wanted to sing in his group which was to become The Pop Rivets. Their first gig was September 1977. They went on to release two LP's and an EP before splitting up in 1980. Mickey Hampshire and Banana Bertie were Pop Rivets Roadies---They had a band called Micky and the Milkshakes who'd occasionally supported the Rivets, playing a set of mainly punk covers, somethimes with Billy joining them on rhythm guitar. After the Rivets split, Billy joined Mickey and Bert and as he was now sharing the vocal/guitar spot, the band name was shortened to Thee Milkshakes. Bruce wanted to get into the action too, but was told he had to learn to play the drums first. Thee Milkshakes came out of the ashes of The Pop Rivets, mainly as a reaction to what punk rock had changed into: synthesized crap. We wanted to get back ino playing decent rock'n'roll. Sadly after 5 years of touring europe and releasing Numerous LP's, EP's, and Singles, Thee Milkshakes disbanded as Mick was retiring. So this was the end of an era.