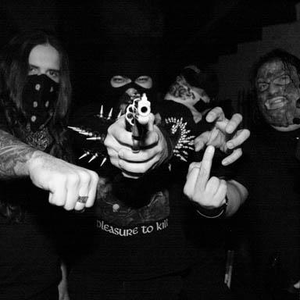 Asesino is an American death metal band based in Los Angeles, California. They are a side project of Fear Factory guitarist Dino Cazares that was formed in 2002. The band has featured members of Brujeria, Fear Factory, Sepultura, Sadistic Intent and Static-X. Asesino sometimes play Slayer covers live, most notably "Angel of Death" and "Raining Blood". As with Brujeria, the lyrics are sung entirely in Spanish and with the same subject matter of death, violence and perversion. Guitarist Asesino (Cazares) describes the band as "the new Brujeria." Asesino also has the tendency of making satirical comments during the show, and when playing Brujeria songs, change the original lyrics to something more fitting. "Asesino" is Spanish for "assassin".