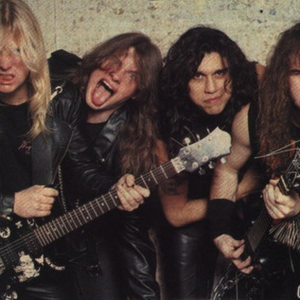 Slayer is a thrash metal band from US, formed in 1981. The band was founded by guitarists Jeff Hanneman and Kerry King. The band was credited as one of the "Big Four" thrash metal bands, along with Metallica, Anthrax, and Megadeth. Slayer's musical traits involve fast tremolo picking, guitar solos, double bass drumming, and shouting vocals. The band's lyrics and album art, which cover topics such as death, deviants, suicide, genocide, necrophilia, insanity, Nazism, religion, Satanism, serial killers, and warfare have generated album bans, delays, lawsuits and strong criticism from religious groups and the general public. Slayer is best known for speaking through perspective without being necessarily sympathetic to the cause of their inspiration.

Haunting the Chapel
1983
Album has 8 releases