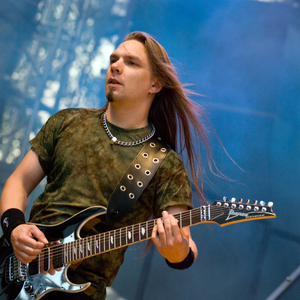 Viljanen was born in 1975, and started playing the guitar at eight, in 1983. Initially, he says that he began playing "because his dad forced him... and, of course, I wanted to be like KISS." He got his first acoustic guitar a year later, but didn't get an electric guitar until nearly four years later. After finally convincing his parents to let him purchase his first electric guitar (a white Leadstar), he took a few guitar lessons and learned some basic chords, but believed that if he wanted to learn rock'n'roll, it'd be something he's have to teach himself. So, around age thirteen, Viljanen began playing in local bands immediately after, heavily influenced by Metallica's early thrash metal. At age seventeen, he was given his first record contract.