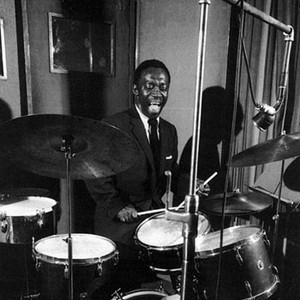 Arthur "Art" Blakey (October 11, 1919 – October 16, 1990), also known as Abdullah Ibn Buhaina, was an American jazz drummer and bandleader. Along with Kenny Clarke and Max Roach, he was one of the inventors of the modern bebop style of drumming. He is known as a powerful musician and a vital groover; his brand of bluesy, funky hard bop was and continues to be profoundly influential on mainstream jazz. For more than 30 years his band Art Blakey & The Jazz Messengers included many young musicians who went on to become prominent names in jazz. The band's legacy is thus not only known for the often exceptionally fine music it produced, but as a proving ground for several generations of jazz musicians; Blakey's groups are matched only by those of Miles Davis in this regard. He was a member of the Ahmadiyya Muslim Community.