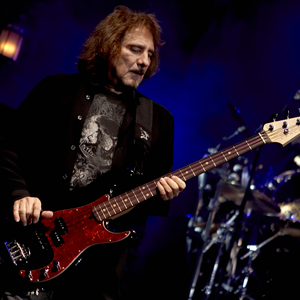 Terence Michael Joseph "Geezer" Butler (born 17 July 1949 in Aston, Birmingham, England) is the founding bassist for heavy metal legends Black Sabbath. His nickname supposedly arises from his habit as a teenager of referring to everyone as "Geezer". Geezer formed his first band, Rare Breed, with schoolmate John "Ozzy" Osbourne in the autumn of 1967. Separated for a time, Ozzy and Geezer reunited in the blues foursome, Polka Tulk, along with Guitarist Tony Iommi and drummer Bill Ward. They renamed their band Earth, but after finding a band in the small-time English circuit with the same name, soon adopted Black Sabbath in early 1969.