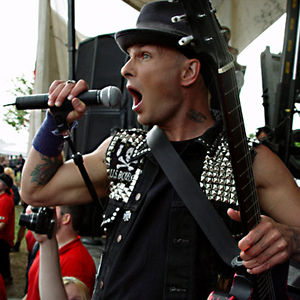 Timothy Lockwood Armstrong (born November 25 1966) is an American musician best known for his work with punk rock bands Rancid, Operation Ivy, and Transplants, as well as his record label Hellcat Records. One of the first bands that Tim played in was Basic Radio. After Basic Radio disbanded, he performed in the ska punk band Operation Ivy under the nickname "Lint" from their beginning in 1987, until they disbanded in 1989. Soon thereafter, Armstrong helped found the Dance Hall Crashers, but left the band after a brief period of time. He was also in Downfall with Matt Freeman (Rancid). In 1991 Armstrong went on to greater fame with the very successful Rancid.