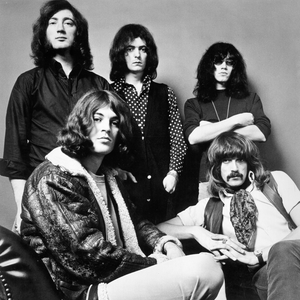 Deep Purple is an English hard rock band that formed in Hertfordshire in 1968. Together with groups such as Black Sabbath and Led Zeppelin, they're considered as heavy metal pioneers. Especially influential to later metal bands were Ian Gillan's powerful screams and Ritchie Blackmore's virtuoso solos. Deep Purple were also very influential to progressive music as well, with their style evolving over the years and incorporating a variety of genres from art rock to blues to psychedelia and more.

Deep Purple's early output ranged from energetic rock (such as their cover of Joe South's "Hush", which became an iconic radio hit that climbed to #4 on the U.S. Billboard Hot 100 chart) to strongly classically influenced pieces (such as "April", a fan-loved gem from their third album). Their first few albums contained very long solos, such as those on the band's covers of "Hey Joe" and "I'm So Glad". The appeal of the more heavy, arena-friendly tracks from the group brought them considerable success in the U.S., setting them apart from many English contemporaries, particularly in their 1968 debut album 'Shades of Deep Purple'.

After their third album, founding member and guitarist Ritchie Blackmore in particular felt the band should move in a harder direction. He additionally felt that then singer Rod Evans and bassist Nicky Simper were incapable of working in that direction. Both were therefore let go, and Blackmore had them replaced with singer Ian Gillan and bassist Roger Glover from pop rock group Episode Six. What is now thought of as the classic Deep Purple line-up came to be when keyboardist Jon Lord and drummer Ian Paice came in, this line-up being often labeled as 'MK II' (in contrast to the previous 'MK I' with Evans and Simper).

The first output of this revamped group was a mixed electric and orchestral album with the London Philharmonic Orchestra, 'Deep Purple in Concert', with the centrepiece being Lord's "Concerto for Group and Orchestra". The 1969 release earned some international commercial success despite (or, prehaps, because of) its novetly, reaching #149 on the Billboard 200 chart. The whole project was reputedly initiated after idle chat with the band's manager about the possibility led to him book the orchestra and give the inexperienced composer a deadline to produce the work of a public concert.

Following on from this unusual venture were four very influential studio albums over the next four years: 'Deep Purple in Rock', 'Fireball, Machine Head', and 'Who Do We Think We Are?', and the live album 'Made in Japan'. Aside from earning widespread critical acclaim, the band's influence spread as many new hard rock groups looked to their sound. American audiences ate the English group up, with album after album rising up the Billboard 200 chart.

Though this lineup still recorded some songs with a lighter, almost pop-like tone such as "Strange Kind of Woman" and "Black Night", the influence of their new blood and the impetus this provided to the existing members pushed the band strongly in the direction of heavy rock music. Songs such as "Speed King", "Child in Time", and the massively popular "Smoke on the Water" showed the fiery spirit of the group, with Deep Purple achieving sustained international commercial success.

In 1973, creative tensions led to Gillan and Glover leaving the band, being replaced by previously unknown singer David Coverdale and ex-Trapeze bassist/singer Glenn Hughes. This new lineup continued the success of their predecessors, recording the albums Burn and Stormbringer, and further successful tours and live albums. However, Blackmore became disenchanted with the increasing funk direction he felt the band was taking and left to form Rainbow (a name inspired by the stage set when they performed at the California Jam music festival) with former members of Elf, who had previously toured with Deep Purple as a support act.

The band recruited former James Gang guitarist Tommy Bolin and recording Come Taste the Band. It was on the 75/76 tour that the tensions within the band really came to the surface, finishing with their final performance in Liverpool in March 1976, where Coverdale resigned and the band ceased to exist. Tommy Bolin died of a heroin overdose in December 1976 whilst on tour with his solo band.

Coverdale went on to form Whitesnake, with Paice and Lord joining Tony Ashton to form the short-lived Paice, Ashton and Lord before they too joined Coverdale in Whitesnake. Hughes completed a solo album but spent most of the 70s and 80s fighting drug addiction which he finally overcome in the 90s and has since produced a string of solo albums.

In 1984, Deep Purple's best-known second lineup (Ian Gillan, Jon Lord, Ian Paice, Roger Glover, and Richie Blackmore) reunited to produce the albums Perfect Strangers and The House of Blue Light. Tensions returned however, and Gillan was fired and replaced by Joe Lynn Turner, formerly of Rainbow. This lineup only lasted for one album, Slaves and Masters, before Ian Gillan returned again for The Battle Rages On. Blackmore subsequently departed the band for good while touring in support of this album, being temporarily replaced by Joe Satriani. During this time, many archival live albums of the original Deep Purple lineup were released, such as Scandinavian Nights (a 1988 release of a 1970 concert) and King Biscuit Flower Hour (a 1995 release of two 1976 concerts)

The remaining members recruited Dixie Dregs/Kansas guitarist Steve Morse and, revitalised, produced what many regarded as their best work in many years, Purpendicular, then Abandon before Lord retired and was replaced by former Rainbow and Ozzy Osbourne keyboardist Don Airey. This lineup has since recorded the albums Bananas and Rapture of the Deep.

While not as influential or commercially successful as in their original incarnation, the band have remained a successful studio and live act throughout this latest period.

1969 - Concerto for Group and Orchestra

Band Line Up (Mark I to Mark VIII):