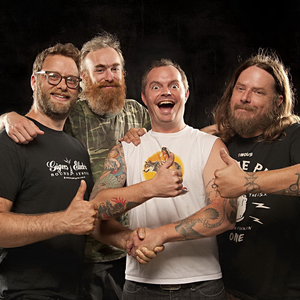 Red Fang are the result of the band Party Time recruiting Aaron Beam and eventually changing their name. David Sullivan had previously been a guitarist in Facedowninshit, also a Portland, OR outfit; he also played alongside Giles and Sherman in a band called Party Time. Giles also spent time in a band called Last of the Juanitas. Aaron Beam played bass for Dark Forces and Lachyrmator before Red Fang’s inception. Sherman, in addition to Party Time, played drums for Bad Wizard, Truman’s Water, and All Night before being recruited to Party Time, who would eventually change their name to Red Fang. Giles stated in an interview that, “Red Fang was just one of the names that didn’t suck a lot.”

Listen to the Sirens
2018
Album has 1 releases