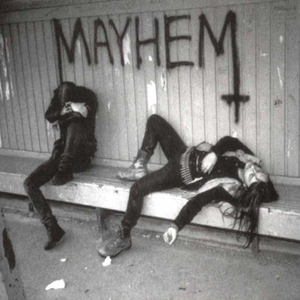 There are at least five artists under this name. Two Black Metal Bands, a Thrash Metal band, a Hardcore Punk Band and an Electronica musician with this Nickname: #1) Mayhem is a black metal band from Oslo, Norway which was originally formed in 1983, taking strong influence especially from Hellhammer/Celtic Frost, Venom and from earlier Bathory. The name "Mayhem" was taken from the title of the Venom song "Mayhem with Mercy". Much controversy has surrounded the band regarding various murders, suicides, and other forms of violence. Mayhem have moved through a variety of black metal styles, even going so far as delving into the areas of dark avant-garde industrial and electronica. The group (in its earliest, and most accepted and popular incarnation; 1983-1993) are widely considered to be one of the cornerstone bands in the movement often labelled "the second wave" of black metal. In the years since, their influence has only grown.