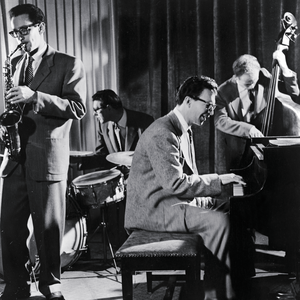 The Dave Brubeck Quartet was an American modern jazz group formed in San Francisco in 1951 by jazz pianist Dave Brubeck (1920-2012). In what became known as the band's classic line-up, the band featured Joe Morello (1928–2011) on drums, Eugene Wright on bass, and Paul Desmond (1924-1977) on saxophone. The band remains best-known for their use of odd time signatures, and were a premier group in the cool jazz movement. They produced several standards, including Take Five and Blue Rondo à la Turk.

Fans of The Dave Brubeck Quartet (0)

ShoutBox for The Dave Brubeck Quartet