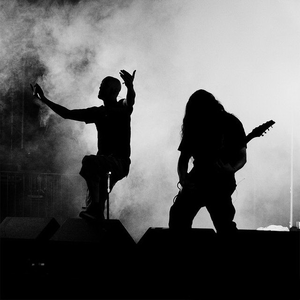 Meshuggah, whose name is taken from the Hebrew and Yiddish word for “crazy”, is a five-piece band from Umeå, Sweden, founded in 1987. The band's style is most easily described as extreme/technical metal with some jazz influence. They use extended polymetric passages, polyrhythmic drum patterns, angular, dissonant guitar riffs, and harsh vocals. Their lineup has always been consistent, apart from bass which has been handled by many people since the band’s inception. Their current lineup consists of Jens Kidman (vocals), Fredrik Thordendal (lead/rhythm guitar + backup vocals), Mårten Hagström (rhythm guitar + backup vocals), Dick Lövgren (bass) and Tomas Haake (drums).