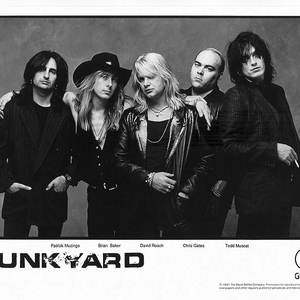 There is more than one artist with this name:

1) A gritty, heavily tattooed outfit that infused elements of southern rock and blues into their brand of L.A. sleaze metal. Their no-frills brand of rock'n'roll, where the music mattered more then the image, should have made them household names, but they failed to have much in the way of commercial success.

Formed in Los Angeles by a couple of transplanted Texans in David Roach (vocals) and Chris Gates (guitar, ex-Big Boys). Members came and went before they offered the drum stool to Pat Muzingo, who in turn brought with him bassist Clay Anthony. The final piece of the puzzle was the addition of guitarist Brian Baker, whom Gates knew from the punk circuit when he was in such bands as Minor Threat and Dag Nasty. The self-titled debut album, produced by the legendary Tom Werman, followed a grittier hard rock path then the punk roots of the members. The follow-up was more of the same raunchy music, but just before it's release Todd Muscat (Decry) replaced Anthony.

2) A Romanian MC, producer and DJ. MC of Suie Paparude.

Cezar Stanciulescu a.k.a Junkyard started in 1994 as an MC collaborating in different projects together with his friends in live shows, recordings, jam-sessions.The style was then a mixture of hip-hop and trip-hop.

In 1996 along friends they launched the band Junkyard, a combination based on English lyrics, an aspect that was not “tolerated” at all by the record labels of that time.After several productions in this musical area, at the end of the 90’s he invited Lalo to join Junkyard.After several shows their roads splited for a while.Meanwhile Cezar began studio work as an audio producer, activity that he continues today at Trust Productions, a studio mainly headed towards advertising.The experience gained in this domain helped him to improve his composing skills, sound desing, mastering and other audio –type sub-domains.In 2003 he joined Suie Paparude along Michi and Dobrica as an Mc, vocalist and recently in composition. One can find details about al these sagas on www.suiepaparude.ro.

At the beginning of 2007 he decides together with Lalo to be live mix DJ’s considering that this the best way to test live their own productions.