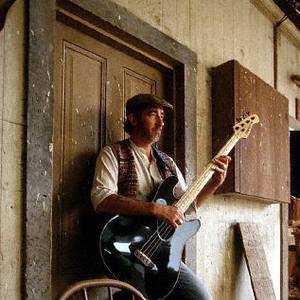 John McVie (born in London, 26 November 1945) is the long-time bassist for Fleetwood Mac . After initially training to be a tax inspector when he left school at 17, he began his music career playing bass in John Mayall & The Bluesbreakers and recorded four albums with the band. After Eric Clapton left the band, a young guitarist called Peter Green joined as his replacement, followed by drummer Mick Fleetwood replacing Ansley Dunbar a year later. Green, Fleetwood and McVie struck up a strong friendship, and when Green left to form his new band he asked both the bassist and drummer to join. At first McVie decided to remain with the Bluesbreakers but confident that McVie would eventually join, Green named the band Fleetwood Mac after what he hoped would be his rhythm section. Green's confidence proved well founded as McVie did indeed change his mind a few weeks later and officially joined the band in December 1967.