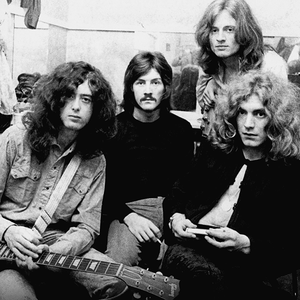 Led Zeppelin were an English rock band originally formed in 1968 by guitarist Jimmy Page under the name "The New Yardbirds", based on Page's previous band, The Yardbirds. The band formed when Jimmy Page (guitar) recruited Robert Plant (vocals, harmonica), John Paul Jones (bass guitar, keyboards, mandolin), and John Bonham (drums). With their heavy, guitar-driven blues-rock sound, Led Zeppelin are regularly cited as one of the progenitors of heavy metal and hard rock music. However, the band's individualistic style drew from many sources and transcends any one genre. Led Zeppelin did not release songs from their albums as singles in the UK, as they preferred to develop the concept of "album-oriented rock".

Thirty years after disbanding following Bonham's death in 1980, the band continues to be held in high regard for their artistic achievements, commercial success, and broad influence. The band have sold over 200 million albums worldwide, including 111.5 million certified units in the United States, making them one of the best-selling music artists of all time. They have had all of their original studio albums reach the top ten of the Billboard album chart in the US, with six reaching the number one spot.

Shortly after their first tour, the group's eponymous first album was released on 12th January 1969. Its blend of blues and rock influences with distorted amplification made it one of the pivotal records in the evolution of heavy metal music. Although several of Led Zeppelin's earliest songs were based on or were cover versions of blues standards, others such as "Communication Breakdown" had a unique and distinctively heavy sound. Led Zeppelin also featured delicate acoustic guitar on "Black Mountain Side" in which the influence of Davy Graham can be heard, and a combination of acoustic and electric approaches on the reworked folk song "Babe I'm Gonna Leave You". The immediate success of the first album kick-started the band's career, especially in the United States, where they would frequently tour.

The second record, simply titled Led Zeppelin II, followed in similar style later that year, and was an even greater success for the group, reaching the number-one chart position in both the United States and the United Kingdom.

Jimmy Page and Robert Plant were blues fanatics; their first album included the Willie Dixon song "You Shook Me", and their later hit "Whole Lotta Love" was lyrically very similar to an earlier Dixon song. (The band were subsequently accused of using his lyrics without crediting Dixon, and it was not until Chess Records brought suit fifteen years later, that proper credit - and a monetary settlement - was given.)

For the writing of the music on their third album, Led Zeppelin III, the band retired to Bron-yr-Aur, a remote cottage in Wales. This resulted in a more acoustic sound (and a song "Bron-yr-Aur Stomp", misspellt as "Bron-y-Aur Stomp" on the album cover) strongly influenced by Celtic and folk music. Led Zeppelin III also ushered in an era of unique album jackets, this one featuring a wheel that displayed various images through cutouts in the main jacket sleeve when rotated. In November 1970 Led Zeppelin's record label, Atlantic Records, released "Immigrant Song" as a single against the band's wishes (Atlantic had earlier released an edited version of "Whole Lotta Love" which cut the 5:34 song to 3:10). It included their only B-side, "Hey Hey What Can I Do". Even though the band saw their albums as indivisible, whole listening experiences - and their manager, Peter Grant, maintained an aggressive pro-album stance - nine other singles were released without their consent. The group also resisted television appearances, which would have reduced their ability to control their presentation and sound quality. Lack of Zeppelin television exposure also enforced the band's preference that their fans hear and see them in person.

Their fourth album, Led Zeppelin IV was actually untitled, but is commonly referred to as Zoso, Runes, The Fourth Album, Sticks, Man with Sticks, or Four Symbols; it featured "Stairway to Heaven", which Jimmy Page performed on stage on a custom-built double-necked electric Gibson guitar, the top neck a twelve-stringed version.

Over twenty-five years after disbanding in response to drummer John Bonham's tragic death in 1980, Led Zeppelin continue to be held in high regard for their artistic achievements, commercial success and influence.

Since they disbanded, Page, Plant, and Jones have only played together on rare occasions. Page and Plant did get back together to record No Quarter: Jimmy Page and Robert Plant Unledded as part of the MTV Unplugged series in 1994, which was accompanied by a worldwide tour, and again in 1998 for the studio album Walking Into Clarksdale. John Paul Jones also has performed since the break up - at the Bonnaroo music festival in Manchester, Tennessee. He was part of a "SuperJam" featuring himself on bass, Ben Harper on guitar, and Ahmir "?uestlove" Thompson on drums. He also played as a guest during the sets of various other artists throughout the weekend.

Most recently Led Zeppelin have reformed (with Jason Bonham filling in on drums) for a one-off reunion concert in memory of Atlantic Records co-founder and executive Ahmet Ertegün. After a postponement due to Jimmy Page fracturing one of his fingers, the group performed on 10th December 2007 at the O2 Arena, London. The concert was filmed for a potential DVD release. Jimmy Page has hinted that the group may start work on new material, and that a world tour may be in the works.

Throughout their career, Led Zeppelin have collected many honours and awards. They were inducted into the Rock and Roll Hall of Fame in 1995, and the UK Music Hall of Fame in 2006. Among the band's awards are an American Music Award in 2005, and the Polar Music Prize in 2006. Led Zeppelin were the recipient of a Grammy Lifetime Achievement Award in 2005, and four of their recordings have been inducted into the Grammy Hall of Fame. They have been awarded five Diamond albums, as well as fourteen Multi-Platinum, four Platinum and one Gold album in the United States, while in the UK they have five Multi-Platinum, six Platinum, one Gold and four Silver albums. In addition to listing five of their albums among The 500 Greatest Albums of All Time, Rolling Stone named Led Zeppelin the 14th-greatest artist of all time in 2004.

Page was appointed an Officer of the Order of the British Empire in recognition of his charity work in 2005 and Plant was honoured as a Commander of the Order of the British Empire for his services to popular music in 2009. The band are ranked number one on VH1's 100 Greatest Artists of Hard Rock and Classic Rock's "50 best live acts of all time". They were awarded an Ivor Novello Award for "Outstanding Contribution to British Music" in 1977, as well as a "Lifetime Achievement Award" at the 42nd Annual Ivor Novello awards ceremony in 1997. The band were honoured at the 2008 MOJO Awards with the "Best Live Act" prize for their one-off reunion, and were described as the "greatest rock and roll band of all time". The three surviving members (Page, Plant, and Jones) were named as 2012 recipients of Kennedy Center Honors.