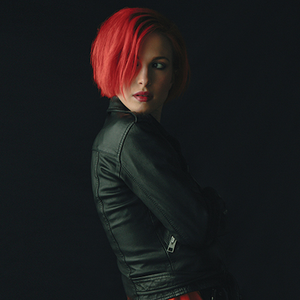 Hayley Williams is the vocalist of the Tennessee rock band Paramore. The band released their debut album, All We Know Is Falling, in 2005. Hayley was born on December 27, 1988. She moved from Meridian, Mississippi, her hometown, to Franklin, Tennessee at the age of 14. Although she had always tried to improve her voice and write small melodies and songs, when she met brothers Josh and Zac Farro, they introduced her to such rock greats as The Cure, U2, Sparta, and Failure. In a recent interview, Hayley said, "It was all so new for me. It really challenged me to use my voice in different ways. It was also good for me as a writer because I realized that lyrics didn't have to be simple pop stuff; they could be harder and deeper."