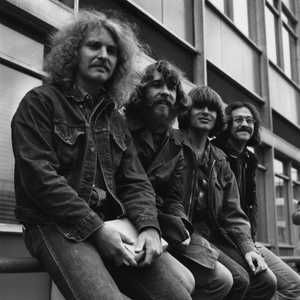 Creedence Clearwater Revival (sometimes shortened to Creedence or CCR) was an American rock band that gained popularity in the late 1960s and early 1970s with a number of successful singles drawn from various albums. The band consisted of lead vocalist, lead guitarist, and primary songwriter John Fogerty, his brother and rhythm guitarist Tom Fogerty, bassist Stu Cook, and drummer Doug Clifford. Their musical style encompassed country rock and swamp rock genres; it remains a staple of radio airplay worldwide. They were inducted into the Rock and Roll Hall of Fame in 1993 and were ranked at 82 on Rolling Stone's list of the 100 greatest artists of all time.

I Heard It Through the Grapevine
1974
Album has 1 releases

Down on the Corner
1968
Album has 1 releases