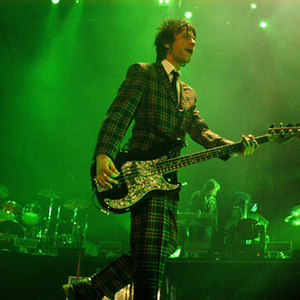 Tommy Stinson (born Thomas Eugene Stinson, 6 October, 1966 in Minneapolis, USA), currently a member of Guns N' Roses, was one of the founding members of the legendary 1980s alternative band The Replacements. Just 12 years old when he joined, Stinson played bass for The Replacements until their breakup in 1991.

He then formed the short-lived bands Bash & Pop who in 1993 released one album Friday Night Is Killing Me and then later, Perfect, who released an EP in 1996 titled When Squirrels Play Chicken. In 1997 their album Seven Days a Week was shelved due to record company problems.

In 1998 Stinson appeared on Puff Daddy's "It's All About The Benjamins (Rock Remix)" along with Foo Fighters frontman and former Nirvana and Queens of the Stone Age drummer Dave Grohl. He also can be seen playing bass for the song in the music video. Stinson has been the bass player for Guns N' Roses since 1998.

In 2004, Stinson released a solo album Village Gorilla Head which was well-received by the music press. Also that year, Stinson's band Perfect finally released the shelved Seven Days a Week, which they retitled Once Twice Three Times a Maybe.

In the fall of 2005, Tommy joined Soul Asylum for a few gigs in tribute to Karl Mueller. Tommy and Dave Pirner (founding member of Soul Asylum ) were friends in High School in Minneapolis, MN. He also scored the Jennifer Garner movie Catch and Release.

In between touring and writing, he managed to produce Bobot Adrenaline's debut album Unfurled.

In December 2005, he reconvened with Paul Westerberg and Chris Mars to record two new songs for a Replacements compilation. Stinson further collaberated with Westerberg on the soundtrack to the Sony feature film Open Season, recording bass tracks for 'Love You in the Fall' and 'Right to Arm Bears'. The two also recorded 'Wild as I Wanna Be' but Sony reportedly rejected the song because they thought Westerberg sounded ill. The song was instead recorded by Deathray.

In the summer of 2006 Tommy played a few shows with Soul Asylum once more during a break in the Guns N' Roses tour.

During the early-to-mid years of this decade, a flier for a Tommy Stinson show tacked to a utility pole was visible in one of the commercial bumpers of Saturday Night Live.