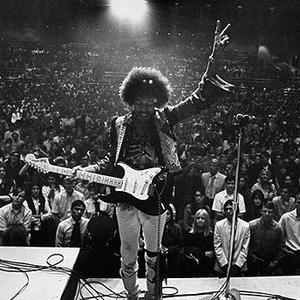 James Marshall "Jimi" Hendrix (born Johnny Allen Hendrix; 27th November at Seattle's King County Hospital, 1942 - 18th September 1970) was a U.S. guitarist, singer, and songwriter. Hendrix was not very popular in the U.S.A. at the outset of his musical career, only later gaining recognition after taking a trip to England in 1966 with The Animals' Chas Chandler, where he subsequently formed The Jimi Hendrix Experience with bassist Noel Redding and drummer Mitch Mitchell. While The Experience quickly became popular in England, they remained relatively unrecognised outside the country. It was not until their 1967 performance at the Monterey International Pop Festival in the States that The Experience became, quite literally overnight, one of the most popular bands of the era.