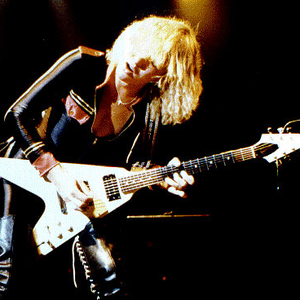 Michael Schenker (born January 10, 1955) is a hard rock and heavy metal guitarist of UFO and a founding member of the Scorpions. He signed with Chrysalis Records in autumn 1979 after leaving UFO. He is the younger brother of Rudolf Schenker of Scorpions fame. Michael was born in Sarstedt, Germany. He started playing in his early teens when his brother Rudolph brought home a Flying V guitar, which captured Michael's imagination. His playing style is unusual in that he seems not to use conventionally practiced guitar scales but seems instead to improvise.